My ADA Story: A Mother's Advocacy 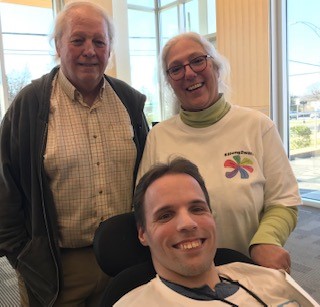 Jim, Sarah and Matt Potter at the N.C. Innovations Waiver Action Team Rally, #2long2wait, Forsyth County Public Library, Winston-Salem, NC, March 7, 2020I’m a mother and an advocate.  I guess all mothers are advocates!  This story is about my second son.  He was born prematurely and weighed a little more than two pounds.  During his 18-month check-up the doctors told us he likely had Cerebral palsy, he wouldn’t walk and would have cognitive difficulties.  This was all so sudden and overwhelming to hear all at once.  I asked if we could take a “wait and see” approach.

My son was again evaluated in an early intervention program as we prepared for him to enter the school system.  He received several evaluations from several specialists.  Again, they said he would probably have cognitive issues.  The school system then recommended he attend a “special” school that was totally segregated from his neighborhood peers.  I knew in my gut that was not the best choice for my son.  It just felt wrong.

By the time he was three years old he was talking in complete sentences.  His initials are MM.  He was so engaging and talkative that we joke MM stood for “motor mouth!”  I respected and am thankful for the experts who helped him, but I always felt they underestimated his abilities.  Advising a parent to lower their expectations for a child is a dangerous thing.

I remember having my son attend his IEP meetings in elementary school.  I wanted him to learn to speak for himself – which he could do quite well.  In fact, I would often stumble trying to explain what he needed, but he was able to tell them what accommodations would help him the most.  He was successfully included in our neighborhood school and not in a separate school in an isolated setting.

He joined a self-advocacy group in middle school and again in high school.  He went to Wake Forest University, joined the ADA Advisory committee and graduated in 2009.  He continues to advocate at the local, state and federal levels.  We now work with the NC Empowerment Network.  This group of self-advocates is formed to help people self-direct, speak up for themselves and live their fullest, independent lives.

As a mom and advocate, my message is to not let everyone else determine what someone can or cannot do.  Speak up.  Speak out.  People have the ability and right to have their own life and live on their terms whenever possible.  Don’t be limited by what others expect.  And to my fellow mothers, don’t second guess your gut.  Sometimes (most times) mothers do know best.

“As a mom and advocate my message is to not let everyone else determine what someone can or cannot do.  Speak up.  Speak out.”

“People have the ability and right to have their own life and live on their terms whenever possible.  Don’t be limited by what others expect.”

Celebrating the 30th Anniversary of the ADA

Read all the stories here or share your own ADA story.