This article was originally written on July 26, 2015

On July 24, members of the community gathered at Triad Park in Kernersville to celebrate the 25th anniversary of the Americans with Disabilities Act. The event was organized by local disability agencies in celebration of the landmark disability rights legislation, which was signed into law by President George H.W. Bush on July 26th, 1990. The signing marked the end of a long struggle involving the disability community, other civil rights groups, legislative aides, and members of Congress at the time. 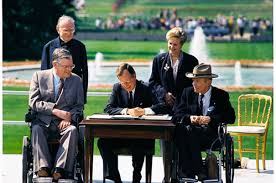 Signing of the ADATwo proclamations opened the festivities at Triad Park – one from Winston Salem Mayor Allen Joines, and a second one from Kernersville Mayor Dawn Morgan. Both declared the 24th of July ADA day in their respective cities.

“We all have barriers,” Morgan said. “Sometimes barriers in understanding, sometimes physical limitations. We are here today to continue to remove barriers to equality, independence and freedom.”

Vicky Smith, Executive Director of Disability Rights North Carolina, which fights for the enforcement of the ADA and other disability rights laws, reflected upon the many impacts of the law.

“The ADA is all about creating accessible communities,” said Smith. “Accessible communities benefit everyone. The ADA literally opened doors of hotels, restaurants, stores, court houses, swimming pools and many other places. The ADA prohibited employers from discriminating against people with disabilities.”

The ADA protects people with disabilities’ right to access every part of American life. The Act, composed of five titles, is celebrated as one of the broadest and most important civil rights laws in U.S. history. The overall act contains provisions related to employment, access to government buildings, discrimination in publicly accessible places such as stores, restaurants and schools, and communications.

The Anniversary event was sponsored by local organizations who seek to help in the implementation of the ADA, including Goodwill, MV-1 of NC (A Flow Automotive Company), Communication Services for the Deaf & Hard of Hearing,  and the Mayor’s Council for People with Disabilities for both Winston-Salem and Kernersville. The Adaptables, a local agency assisting people with disabilities Forsyth, Davidson, Davie, Stokes, Yadkin, and Surry Counties, was also one of the sponsors of the event.

Melissa Wilkins, a volunteer for The Adaptables, described why it is important that the ADA be celebrated and protected. “People with disabilities are not worth less than others,” Wilkins said. “People, especially in this country, should be able to do anything with their talents. People shouldn’t be held back because we don’t have access to places.”

Former Executive Director of the Adaptables Jim Whalen expressed hope for the future. “I pray that someday legislators will debate that the ADA is no longer needed because these people with disabilities are taking over too many important roles in society, or be arguing ‘we’re all different in some way’ so why is this disability thing an issue,” Whalen said. “I am hoping it happens when my children’s children are my age.”

“Whalen continued, “My biggest fear that we are nearing the point where a quote by Einstein applies… and I paraphrase… ‘the only enemy worse than evil is apathy’. I think the biggest threat to disability equality … is apathy.”

The five titles of the ADA cover civil rights protections for people with disabilities in the following areas:

Here is a link to the original article: http://www.camelcitydispatch.com/community-celebrates-25th-anniversary-of-the-signing-of-the-ada-7261990/