As North Carolina continues to deal with the impact of Hurricane Florence, we see stories of devastation, courage, resilience, and the increasingly important role community plays in the lives of every individual. While catastrophe can impact anyone, we know firsthand that outcomes and disaster recovery are dependent upon resources: transportation to safer areas, enough money to buy the supplies you need, neighbors and friends you can call on for help. In all the work we do at the Council, we want individuals with disabilities to have those resources to draw from.

State and local officials and emergency responders were working around the clock, and they continue to do an outstanding job doing their best to provide needed assistance and support. Our NCCDD office pitched in by sharing emergency preparedness resources across the state in meetings responding to the crisis, email, our website and on social media:

As North Carolina continues to assess damage and needs, NCCDD is ready to identify specific ways the I/DD community can be represented, be a resource, and a true partner moving forward.

In closing, as September gives way to October, we look forward to recognizing the importance of National Disability Employment Awareness Month and our continuing efforts to work toward Employment First! We encourage everyone to, once again, enjoy and share the Council’s One Workforce: Inclusive Employment in North Carolina, a disability employment lookbook we launched in June. Please enjoy it at https://lookbook.nccdd.org/.

While the legislature is not in session, legislative committees are beginning to meet. The Joint Legislative Oversight Committee on Health and Human Services is scheduled to meet October 9th at 9:00 a.m. The agenda is not yet posted but will likely include discussion on Medicaid Reform. This committee offers an audio stream option if anyone is interested in listening to the meeting. The link can be found at www.ncleg.net/LegislativeCalendar.

While the Department of Health and Human Services (DHHS) has rightfully moved its attention to Hurricane Florence, the work on Medicaid Reform continues. The Request for Proposals (RFP) for the Standard Plan, which will cover the large majority of Medicaid enrollees, is now out for bid. As a reminder, the goal is to have the Standard Plan rolled out by February 2020. We will be following this implementation closely for two reasons: 1) It lays the groundwork for the Tailored Plan which will follow about a year after the Standard Plan begins, and 2) there will be some individuals with I/DD who will be in the Standard Plan.

A Tailored Plan Workgroup has begun within DHHS. It is being led by Dave Richard and includes leaders from Division of Health Benefits (State Medicaid) and the Division of Mental Health Developmental Disabilities and Substance Abuse Services (DMHDDSA). This is an internal group, but they continue to actively seek input from stakeholders including the Council. The initiatives of the Council, specifically the Health Home Initiative and the Cross-System Navigation in a Managed Care Environment Initiative, are seen as a source of information as design of the Tailored Plan is underway.

One significant point of discussion regarding the Tailored Plan is the assignment of individuals with I/DD to the Tailored Plan. There is agreement that individuals who receive services through Innovations, B3 services, and other state funded supports through the LME/MCOs will be enrolled in the Tailored Plan. In addition, people on the waitlist/Registry of Unmet Needs will also be enrolled. In anticipation of this, DMHDDSA is working on a project to update and enhance this registry. The plan is to move to a database, instead of simply a list of people, in order to have up-to-date and critical information about people who are waiting for services. The goal is to have this in place before the Tailored Plan begins.

On September 13, the House Energy & Commerce Committee approved the EMPOWER Care Act (S. 2227/H.R. 5306), which reauthorizes Money Follows the Person (MFP) for one year. MFP is a federally-funded state grant which gives Medicaid programs critical resources to assist individuals with disabilities and others to transition out of institutions into their local communities. The bill now goes to the House for a full vote.

The Department of Housing and Urban Development (HUD) awarded $98.5 million to 285 public housing authorities across the United States to provide new, permanent, affordable housing vouchers to nearly 12,000 non-elderly people with disabilities. The vouchers will be provided through the Section 811 Mainstream Housing Choice Voucher Program which assists specific populations on non-elderly people with disabilities who are:

On September 13, a conference committee made of selected House and Senate members approved an appropriations package that funds the Departments of Defense and Labor Health and Human Services, Education and Related Agencies (L-HHS-ED) for fiscal year (FY) 2019 which begins on October 1. Read the conference report and the conference committee's explanatory statement. The Senate is expected to vote on final passage of the conferenced bill this week, and the House during the week of September 24th. 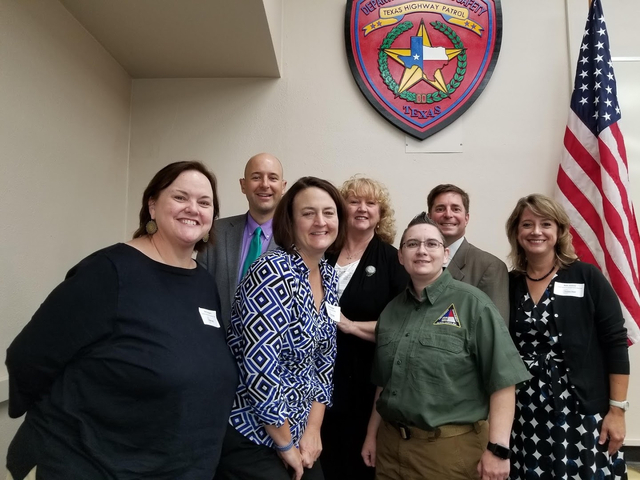 In collaboration with the Texas Council for Developmental Disabilities, whose Executive Director Beth Stalvey previously worked as a Policy Analyst for NCCDD, the North Carolina delegation spoke at the Disability Task Force on Emergency Management meeting and at the Texas Emergency Preparedness Summit on Disabilities.

With Texas still recovering from Hurricane Harvey, the discussion focused on collaborating with key stakeholders and building relationships to ensure that people with I/DD and access and functional needs are prepared and stay safe during hurricanes and other emergencies. The North Carolina group shared resources from NCCDD’s Emergency Preparedness initiative, such as the Show Me: A Communication Tool for Emergency Shelters booklet, and talked about self-advocate involvement and personal preparedness. This collaborative discussion proved to be very timely as Hurricane Florence hit North Carolina a few weeks later. 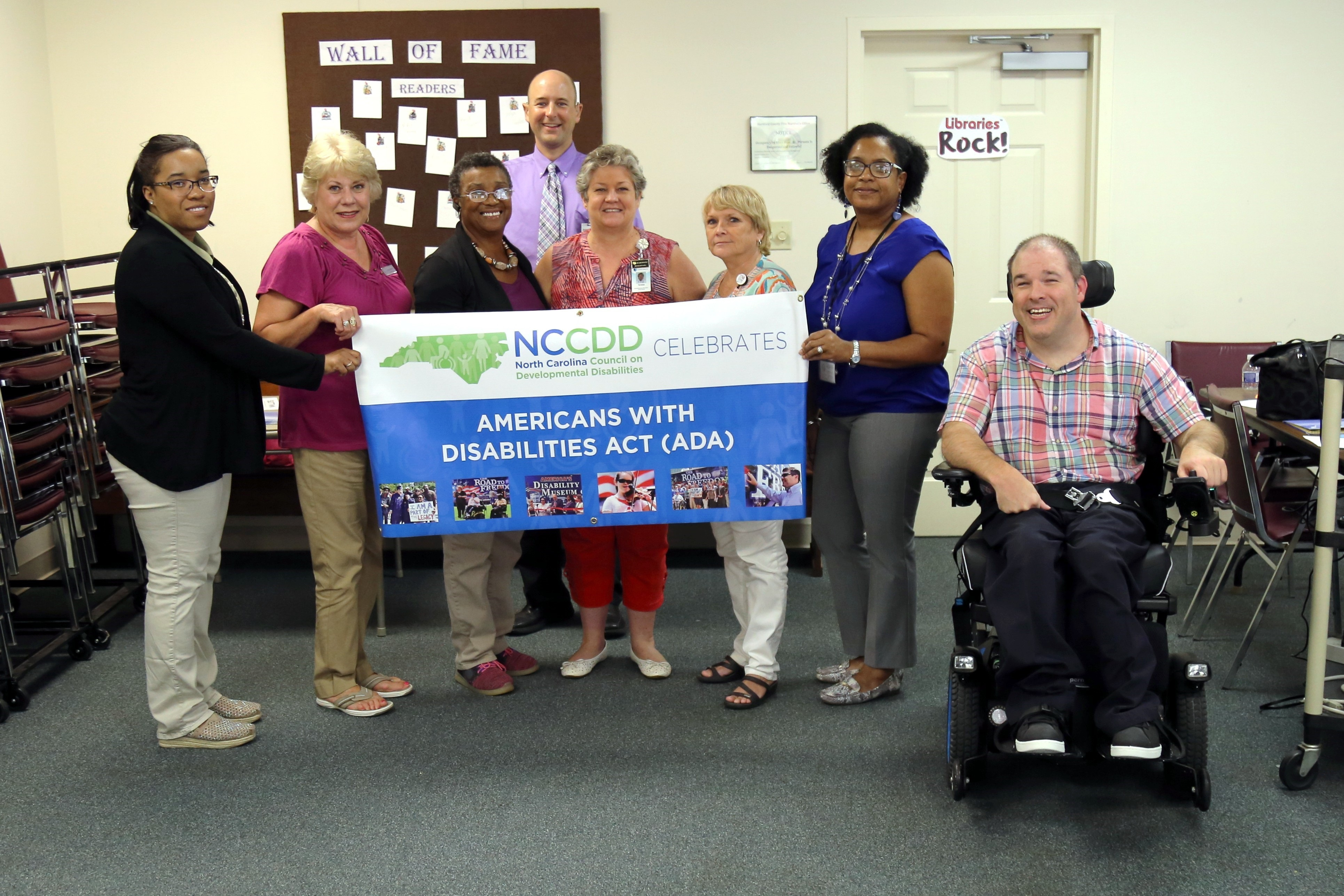 Ellis shared personal stories about his former service dog, Traci, including visiting the training organization in Pennsylvania to be matched with Traci. Ellis and Woodward also showed Disability Rights North Carolina’s new Service Animals 101 for Businesses video released in May of this year: https://www.disabilityrightsnc.org/2018/06/video-service-animals-101-for-businesses/ (This link is no longer active.)

This presentation was part of Ellis’s new business, Sutton Advocate Consulting Services, LLC (SACS, LLC). After participating in a two-day ADA train-the-trainer workshop in Burlington in May 2017, Ellis expressed a desire to start his own ADA training business and has spent the past year establishing it. Ellis said, “SACS, LLC was created for two reasons: To allow North Carolinians to understand their rights and responsibilities under the ADA. And it was a lifelong dream of mine of owning a business in America as a person with a disability.”

“America’s Workforce: Empowering All” is the theme of this year’s National Disability Employment Awareness month (NDEAM). This celebration of employment awareness takes place every year in October. It began in 1945, when Congress declared the first week in October to be "National Employ the Physically Handicapped Week”.

The theme this year is meant to reflect a commitment to a robust and competitive American labor force. Watch the NCCDD website for information on various NDEAM celebrations and acknowledgements throughout the state.

Professionally, he provides clinical and administrative oversight for behavioral health services within North Carolina state prisons to include psychology, social work and alcohol and chemical dependency programs. He has served as an administrator and clinician in federal and state prisons for 29 years, advocating for provision of community health care standards for incarcerated individuals with mental illness and intellectual and developmental disabilities.

Pointing to public bias as the major challenge he has faced when advocating for people with disabilities, Dr. Junker would love to see a focus by the Council on early intervention to reduce stigma and the potential impact of a disability during late childhood or adolescence. Dr. Junker sees community collaboration as the Council’s strength, saying, “The Asheville meeting appeared to be a tremendous success”.

In addition to his career and serving on the Council, Dr. Junker says, “I contribute to the community when time allows by volunteering and making donations to charitable causes. I was previously Chair of the Carrboro Greenway Commission.” That position may have influenced the motto he lives by, which is, "Leave the campground cleaner than you found it."

She felt she was too slow to take on an administrative role for organizations that required fast administrative skills and felt that positions she applied to did not allow her to utilize many of her skills and training as an Office Administrator.

Kristine, who lives with Fetal Alcohol Syndrome (FASD), shared that, "Working for Special Olympics North Carolina has always been my dream job.” When asked to volunteer as an administrative assistant once a week, she excitedly accepted the offer.

Eventually, her volunteerism became part-time employment and today she remains an administrative assistant and is also the athlete leadership manager.

Working with Special Olympics NC has made her feel useful in a society that she feels sometimes makes it hard for individuals with disabilities. She said, "I’ve become more independent and responsible, both financially and in everyday life, thanks to this job.”

This story is a part of NCCDD's employment lookbook, One Workforce: Inclusive Employment In North Carolina. The lookbook shares the stories and photographs of 30 different people across the State - all talented, hard at work and engaged in their chosen fields of employment. By showcasing the talent, determination and initiative of people with disabilities, we can create a state where everybody works together in one united workforce.