The awards, held earlier this month in Cary, NC, recognized Merlie Jackon, a parent advocate from Wilkesboro; Duncan Munn, a retired professional from Raleigh; and Ellen Perry, a self-advocate from Carrboro, NC. 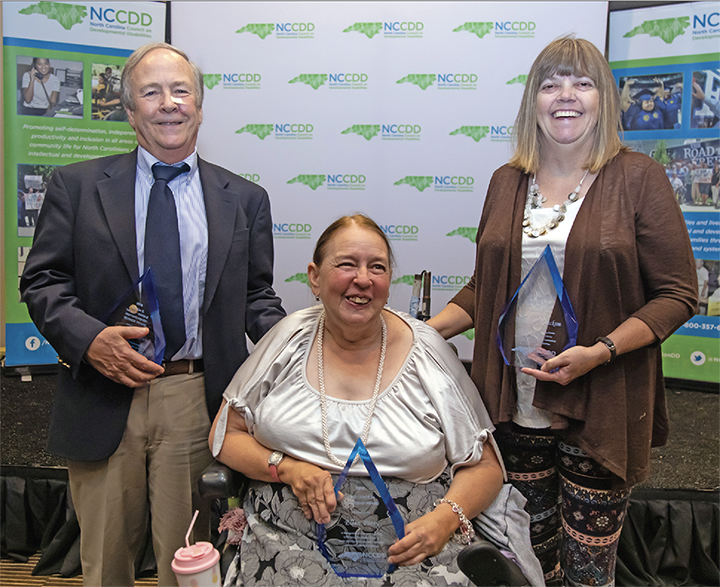 The award recognizes an outstanding North Carolina self-advocate whose work and leadership improved the quality of life for people with intellectual and other developmental disabilities. Perry, a resident of Carrboro, NC, has been instrumental in working with local leadership to implement transportation changes to benefit people with I/DD in Carrboro.

To celebrate the vision and achievement of North Carolina's families and people with I/DD, the Jack B. Hefner Memorial Award was presented to Merlie Jackson of Wilkesboro, NC, for her tireless efforts in supporting the National Tay-Sachs & Allied Diseases (NTSAD). The organization seeks cures for many diseases including Gangliosidosis GM-1, which affects Jackson's daughter, Jessie.

Jackson creates and hosts an annual "Ride for Jessie" motorcycle ride throughout the hills of central Carolina to raise thousands of dollars for a cure. This year's Ride for Jessie raised over $6,000. Jackson is also a key figure at the annual NTSAD Annual Family Conference, where she offers assistance and advice to other parents whose children have GM-1.

View the videos below about the 2018 Award Winners!

The Council's highest recognition for professionals, the Helen C. "Holly" Riddle Distinguished Service Award, honors those who have made lasting contributions towards improving opportunities, breaking down barriers and promoting increased quality of life for people with I/DD. Duncan Munn received this year's award for his extensive work in North Carolina since the late 1960s.

Munn developed a premier early intervention program for infants and toddlers with I/DD, a first for North Carolina and the nation. Now retired, Munn helped develop Beyond Academics, a program at University of North Carolina - Greensboro, which supports students with I/DD earn a four-year certificate of study emphasizing self-determination, life planning and career development.

"NCCDD is honored to recognize Ellen Perry, Duncan Munn and Merlie Jackson with our 2018 awards for their long-term commitment to supporting people with I/DD. Their work to educate and change attitudes throughout the State of North Carolina is outstanding. Thanks to their efforts, the talents of people with intellectual and other developmental disabilities will be felt throughout our state. The Council celebrates their commitment and their impact," said Alexandra "Alex" McArthur, NCCDD chairperson.